(BBC) The United States Senate cleared Donald Trump of both charges in its impeachment trial of the president, bringing to an end the impeachment saga that has consumed Washington since the House of Representatives launched its inquiry into the Trump’s actions last September.

In a 52-48 vote, the Senate found Trump not guilty of abusing his power of office. The Senate voted 53-47 to acquit the president on the charge of obstruction of Congress.

On the first charge, one Republican, Senator Mitt Romney, broke rank and joined all Democrats in voting to convict Trump of abuse of power. But the vote fell well short of the two-thirds majority needed to remove a president. Romney voted with his party on the obstruction of Congress charge.

Democrats had accused Trump of abusing his power by orchestrating a pressure campaign to get Ukraine to investigate his political rival, former Vice President Joe Biden. They also accused him of obstructing Congress for refusing to participate in the impeachment inquiry. Trump denied any wrongdoing, repeatedly calling the impeachment a “hoax”. 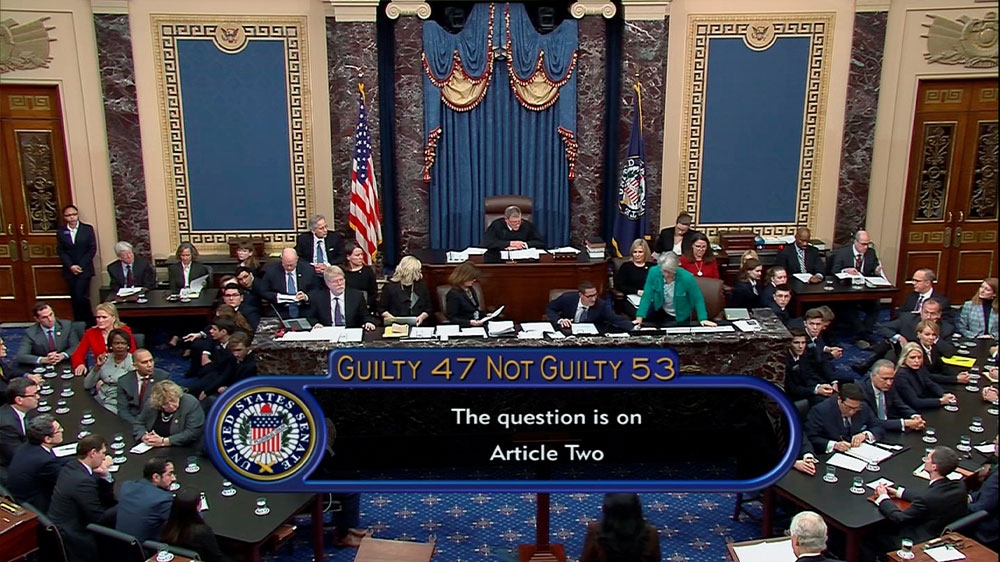 Trump repeated that assertion again shortly after the trial, tweeting he will discuss “our country’s VICTORY on the Impeachment Hoax!” in a public statement from the White House on Thursday afternoon.

Trump’s legal defence in the Senate trial had argued that House Democrats did not sufficiently prove that Trump engaged in the pressure campaign.

Even if Trump did what House Democrats accused him of, many Republicans said it was not a serious enough offence to remove him from office or ban him from running again with only nine months to go before the next US presidential election.

Several Republican senators said the House proved its case and they expressed disapproval of the president’s conduct.

“The president’s behaviour was shameful and wrong. His personal interests do not take precedence over those of this great nation,” Republican Senator Lisa Murkowski said in floor remarks.

Republican Senator Lamar Alexander said in a statement, “it was inappropriate for the president to ask a foreign leader to investigate his political opponent and to withhold United States aid to encourage that investigation.”

While acquittal was always the likely outcome, the question of whether the Senate would call witnesses came to a dramatic head last week amid new revelations from former White House National Security Adviser John Bolton about Trump’s alleged wrongdoing. After four hours of arguments, the Senate voted to block witnesses and new evidence in a 51-49 vote.

Moderate Republicans faced heavy political pressure from Senate Majority Leader Mitch McConnell and the White House not to break ranks during the trial.

McConnell met privately with Murkowski and convinced her not to vote with Democrats to call witnesses in the trial.

McConnell, speaking to reporters after Wednesday’s vote, accused Democrats of using the impeachment trial to try to gain an advantage in winning control of the Senate in November, but called the effort “a colossal political mistake.” He also said he was “surprised and disappointed” by Romney’s vote.

Asked by a reporter whether it was acceptable for a president to ask a foreign country to investigate a political rival, McConnell declined to answer directly.

Trump’s acquittal is not likely to satisfy Democrats’ quest for answers and will leave Trump and his administration open to continuing House investigations.

Chuck Schumer, the top Senate Democrat, said Trump’s acquittal in an unfair trial was worth nothing.

“No doubt, the president will boast he received total exoneration. But we know better. We know this wasn’t a trial by any stretch of the definition,” he said.

House Speaker Nancy Pelosi slammed Wednesday’s acquittal, saying “the president and Senate Republicans have normalised lawlessness and rejected the system of checks and balances of our constitution”.

She added: “The president will boast that he has been acquitted. There can be no acquittal without a trial, and there is no trial without witnesses, documents and evidence …  The president is impeached forever.”

House Judiciary Committee Chairman Jerrold Nadler, who also served as a House manager in the Senate trial, said earlier on Wednesday that the House would likely subpoena Bolton to testify and continue its investigation into the president.

Democrats have expressed concern that an acquittal would further embolden a president who already challenges political norms. They have painted him as a threat to US democracy and a demagogue who has acted lawlessly and exhibited a contempt for the powers of Congress and other institutions. They also have voiced concern over Russia interfering in another US election.

The core of Trump’s impeachment revolved around a July 25 phone call the US president had for Ukraine President Volodymyr Zelenskyy in which Trump asked the Ukrainian for “a favour”.

Before and after the call, according to testimony in the impeachment inquiry, Trump directed government officials and his private agent Rudy Guiliani to demand Zelenskyy announce political investigations in exchange for the release of nearly $400m in security assistance and a White House meeting for Zelenskyy.

Trump wanted Zelenskyy to undertake official investigations of Joe Biden and his son, Hunter, who was a paid board member of Burisma, a Ukrainian gas company. There is no evidence the Biden’s did anything wrong. 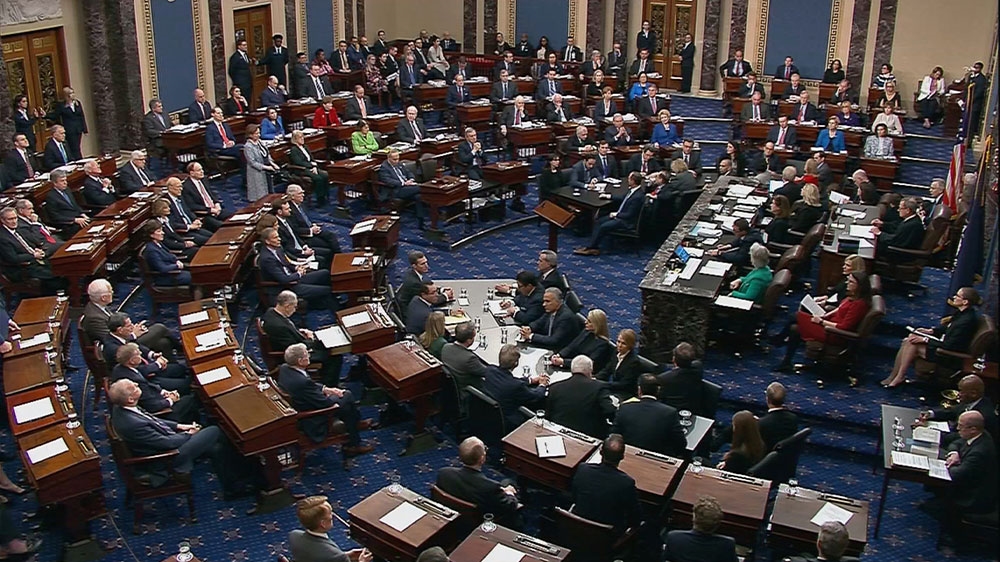 Trump further pushed Zelenskyy to look into a debunked conspiracy theory that it was Ukraine, not Russia, that hacked emails and documents of the Democratic National Committee in 2016 and the campaign of then-candidate Hillary Clinton.

Trump is only the third US president ever to face a Senate trial. No president has ever been removed from office in an impeachment proceeding.

The acquittal handed Trump his biggest victory yet over his Democratic adversaries in Congress.

Trump’s job approval ratings have remained fairly consistent throughout his presidency and the impeachment process as his core conservative supporters – especially white men, rural Americans, evangelical Christians and conservative Catholics – stick with him.

The latest Reuters/Ipsos poll, conducted on Monday and Tuesday, suggested 42 percent of American adults approved of his performance, while 54 percent disapproved. That is nearly the same as when the House launched its impeachment inquiry in September, when his approval stood at 43 percent and disapproval at 53 percent.