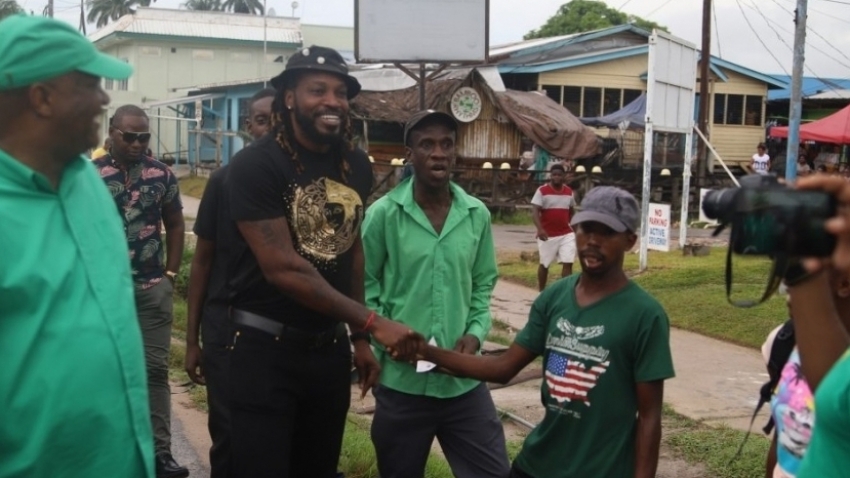 (SportsMax)West Indies batting star Chris Gayle has, through his attorney, directed a Guyanese political official to withdraw statements made about him during a political meeting.

The politician in question Charles Ramson Jr, a member of the Peoples Progressive Party (PPP), reportedly endorsed and shared a claim made during a meeting in Albertown, Georgetown in January.  The claim stated Gayle had been promised US$50,000 by the People’s National Congress Reform (PNCR)  for a visit to Linden late last year and was still trying to get the money, which was owed to him.

The West Indian star was spotted in Linden last year with officials of the PNCR.  The opening batsman who was in the country for a cricket match and to celebrate his 40th birthday was quick to dismiss any political motive or links to the appearance.  Gayle pointed out that the visit had simply been part of a community outreach program.

In a letter dated February 4 Gayle’s attorney Roysdale Forde gave the politician 24 hours to retract the statements, which were referred to as “defamatory” and totally “false.”  The letter went on to state that the claims also seem calculated to subject [Gayle] to ridicule and portray him as being paid by a political party in Guyana to engage in work on its behalf.”

“As you are aware my client is an internationally recognized personality and cricketer and has carefully protected his brand and reputation especially by refusing to engage in public relations activities at the request of political parties,” the letter states, before adding that Gayle has engaged in a number of business ventures in Guyana, such as the promotion of a number of entertainment events, branded on his personality and persons in Guyana,” the letter read.

“Your statements are injurious to the financial success of these events and by extension necessarily to the said business undertaking of my client in Guyana and worldwide,” the letter concluded.